The NY Times Lens Blog has a heartbreaking slide show and story called Breast Cancer as a Death Sentence in Uganda.

Apparently there is only one hospital in the country that treats cancer and, for a variety of reasons, women often wait until it’s too late to make the trip to the capital.  By the time they do, the cancer has metastasized and there is little that can be done.  Here are some excerpts:

“Jessy Acen would get one shot (of chemo) and then wait two weeks until she got the next shot, so instead of going back and forth to her village — which was a $10 bus ride — she would sleep outside of the hospital on a cardboard box while she was waiting for the next round of chemo. She had two sons back in her village that she hadn’t seen in several months and it was just a heartbreaking.”

“Some who have the resources are able to get radiation. Many of them have to bribe themselves to the front of the line. There’s one radiation machine that sometimes serves four different countries. People coming from South Sudan, Congo, Uganda and parts of Kenya all go to this one radiation machine so there are lines and lines of people waiting.”

The Independent reviews the Sachs – Easterly death match and calls it for Easterly!

At least I think that’s what they are saying, I don’t actually speak British:

“To this spectator, it looked like a victor emerged last week.  It is not Sachs. If the bell were rung now, Easterly would walk it.”

In an interesting article on drug cartels and extortion in Mexico, there are some unbelievable tidbits on a bad-ass doctor that refused to pay up.

Here’s how the good doctor originally reacted to extortion demands:

“When the threatening phone calls demanding $20,000 in protection money began in December, Dr. Roman Gomez Gaviria shrugged them off, believing his clinic on the outskirts of Mexico City couldn’t possibly be of interest to criminal gangs.”

Then, in what seems like an understatement, the doctor’s “sense of security was shattered when three armed men barged into his office screaming ‘Dr. Roman, you bastard, where are you?'”

The armed extortioners tried to drag the doctor out of the clinic and he makes this awesome statement: “They thought that, because I’m a doctor, I wasn’t going to resist.”  I don’t think it’s just because he was a doctor, I think they thought he wouldn’t resist because he valued his life.

So how did things work out?  The doctor “managed to break free from his kidnappers, grab one of their guns and shoot two of them to death at close range.”

As I’ve mentioned on this site before, one of my favorite books in recent years on development is The Beautiful Tree: A personal journey into how the world’s poorest people are educating themselves by James Tooley.  I had no idea that there were low-cost private schools for the extremely poor around the world. It was an eye opening, fascinating book.

Now, in exciting news, Tooley’s oft-collaborater Pauline Dixon has a book on the topic called International Aid And Private Schools For The Poor: Smiles, Miracles and Market.  The title of this post is taken from a glowing review by Gurcharan Das and there are many more to be found on the book’s Amazon page.

Here’s a brief description of the book:

“Using India as an example, Dr. Pauline Dixon examines the ways in which private, for-profit schools might serve as a successful alternative to state-run systems of education in impoverished communities around the world.

The book begins with a thorough history of India’s government-run schools – based on the traditional British model – which are currently characterized by high levels of waste, inefficiency and subpar student performance. The author goes on to present comprehensive survey and census data, along with analyses of different school management types and their effect on student achievement, teacher attendance and quality of facilities. The book also tackles the problem of inefficient allocation and use of international aid, and offers recommendations on the development of new mechanisms for utilizing aid resources in support of low-cost private schools.”

This one is moving to the top of my reading list.

One area where Maduro has been able to top Chavez is in producing inflation! Prices are rising at a 49.4% annual rate this year (the 2012 rate was 20%). So congrats to Maduro for this “win”.

Maduro was the picture of modesty though, giving credit to “speculators”.

With this kind of leadership and economic performance, it will be interesting to see how long Chavismo can last post-Chavez. When Mr. God-given Hair gets his turn will things stabilize or deteriorate even faster?

Very nice piece in the WSJ on the overall Chinese strategy of foreign aid.

Follow it up with a well written piece in the New Yorker about a Chinese run mine in Zambia. 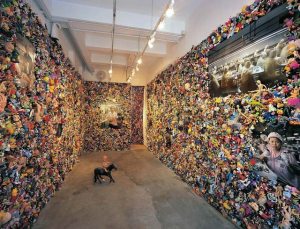 I just came across the work of Michael Wolf, who has an exhibition called Chinese Factory Workers & the Toys They Make.  I’d love to see it in person, but you can click here to see some of the great photos.  Above is the room displaying the toys and photos that he took touring Chinese factories.  Below are some of my favorites: 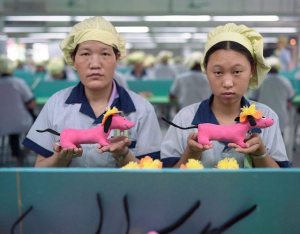 Lant Pritchett cogently points out that the WB insistence that we can “end extreme poverty” relies on a very arbitrary definition of extreme poverty, namely people living below $1.25 a day.

Lant notes that, “No person in history has ever celebrated crossing the dollar a day threshold—any more than any other income gain—there is no line.”

But then he kind of drops the ball by not really attempting to answer the key question he poses, which is,

“So why does the thousand dollar a day crowd try to project an imaginary (and extreme) poverty line into a world in which it doesn’t exist—even as a social construct?”

I’ve written about that question before, and I think the focus on $1.25/day is simply a CYA, keep the money flowing, pay no attention to the man behind the curtain, attempt by the World Bank to find something, anything that doesn’t make them look like a complete failure.

Because $1.25 a day is the only “line” they can draw where it looks like they are doing a good job wrt reducing extreme poverty.

Here’s the data (from the WB, clic the pic for a more legible image): 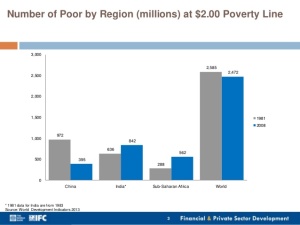 As you can see, there could be no claim of 800 million people lifted out of extreme poverty if we used even this paltry (and equally artificial) $2.00 “line”. It would be only around 100 million, with well over 2 billion left behind.

This puts the lie to WB claims that great progress has been made and that they are on the verge of eliminating extreme poverty.

So pay no attention to Jim Kim’s $1.25 fig leaf. The simple truth is that the WB has been a massive failure with respect to eliminating extreme poverty.

I never thought I’d be quoting California governor Jerry Brown but in some rare good news for immigration reform, he signed into law sweeping new reforms yesterday.  Here are the major reforms, set to go into force in January 2014:

1. “Immigrants in this country illegally would have to be charged with or convicted of a serious offense to be eligible for a 48-hour hold and transfer to U.S. immigration authorities for possible deportation.”

3. “It will be a crime for employers to “induce fear” by threatening to report a person’s immigration status and allow for the suspension or revocation of employers’ business licenses if they retaliate against employees because of citizenship or immigration status.”

4. “There will be a new policy to allow people to apply for driver’s licenses regardless of immigration status.”

The article goes on to not that while many other states have enacted similar reforms, the impact of California’s actions could be especially dramatic since nearly 20% of illegal immigrants in the US are thought to reside there.

It’s nice for a change to wake up to some good news about government action.

1. U.S. and Mexico quietly building trust on their own terms ““We’re very much doing the same thing we’ve done for the past decade or so. We’re just more aware of the sensitivities and respectful of the current climate.'”

2. Mexico’s Female Vigilante Squads “The force is made up of mostly middle-aged housewives, mothers and grandmothers. Many of these women have lost loved ones to violence, or were victims of crime themselves. They have lived in fear for their family, and they decided that they’ve had enough. So roughly 100 women have now volunteered to put their lives on the line in order to protect their children and defend their community.”

3. How Tacos Explain Mexico’s Labor Market “Like meat in an over-stuffed taco, many people don’t fit into the formal sector and fall out to the sidelines.”

4. From a Tortilla, the Feeling of a Warm Embrace “People have been putting food inside tortillas and eating them for centuries, but the first tacos to be called tacos were probably eaten by 18th-century laborers working in the silver mines of Mexico, said José R. Ralat, an expert on the folklore of tacos. The miners gave the food the same name as the little sticks of dynamite they used in their work.”