Sure he went after La Maestra, the head of the teachers’ union after she broke from the PRI, but what about Carlos Romero Deschamps, the head of the petroleum union and PRI Senator? He is rated by Forbes as the second most corrupt person in Mexico:

“Paulina Romero, his daughter, displays onFacebook her travels around the world in private jets –accompanied by her three English bulldogs Keiko, Boli and Morgancita–  her voyages on yachts, dining in first class restaurants and sporting $12,000 Hermes luxury bags. Her brother drives a $2 million limited edition red Enzo Ferrari sport car, a gift from their father, whose trade union monthly salary is $1,864. Romero Deschamps, a federal senator, is reported to have a “cottage” in Cancun with a value close to $1.5 million. According to political analyst Denise Dresser, in 2011 he received $21.6 million for “aid to the union executive committee” and $15.3 million from union dues. My “hands are clean,” Romero Deschamps claims. The Peña Nieto administration seems to agree. He is not under investigation.”

His case is no different from that of La Maestra except that he’s remained loyal to the PRI.

It is fascinating to me that in Forbes’ list of the 10 most corrupt Mexicans, there is a serving PRI Senator and 5 PRI ex-state Governors, yet somehow the PRI is going to reform Mexico. 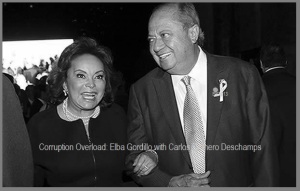