Last month, Casey Cupp, a talented young graphic designer working on his GIS skills, created some tremendous maps of per-capita migration flows for CG. I just heard from Casey again with a new map he’s put together:  this one is of yearly refugees accepted per million residents from 2009-2012.

This map is also excellent (please click the picture to better appreciate its excellency!) 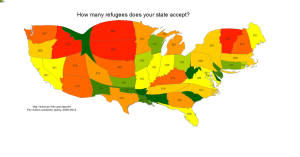 I expressed surprise at how many refugees end up in the Dakotas (at least on a per-capita basis) and Casey wrote back with some interesting thoughts on the map:
“It is almost like the lack of a pattern is what is fascinating.. Montana and Idaho stink but are surrounded by rock stars.
There is definitely more variance in the smaller population states as would be expected somewhat… but not to that extreme.  Of the medium to larger states, AZ, WA, GA, and MI are stand outs, probably even TX.”

Here’s Casey’s twitter address if you’d like to commission him to make you a cool map: https://twitter.com/csekcolorado

After scouring Quora for information on Mexican entrepreneurship (see last week’s post on this topic), I found an interesting interview with Jorge Madrigal.  Jorge is the Founder and CEO of Aventura and has been in charge of various startup events in Mexico City. The interviewer is Cate Costa, who is the Founder of Venture Catalyst Consulting, described as “a small consulting firm that specializes in helping startup company founders plan and expand their new businesses.”

Given his background, I expected him to offer a very rosy view of entrepreneurship in Mexico.  Instead, his thoughts seemed quite balanced and thoughtful. Here are some of my favorites:

1. What are some of the main problems with the state of Mexican entrepreneurship today?

“the most important thing lacking is a community of entrepreneurs and support for their endeavors. He doesn’t see people sharing and developing a sense of community despite major investment from the government including the creation of clusters, incubators, accelerators, etc.”

2. So why have the government’s efforts fallen short?

“The government is attempting to copy other countries’ models but, “Mexico has Mexican problems [to overcome] – not Chinese problems or U.S. problems – problems that are innate to Mexico. The biggest mistake is trying to do things exactly as they’re done in other countries.”

3. So what is an example of an obstacle specific to Mexico?

“Entrepreneurship is not accepted as a legitimate career choice. In fact, it’s often seen as a euphemism for not having a job. This is partly because there are not enough Mexican entrepreneurs serving as role models to show how you can actually make a great living through entrepreneurship and partly because the Mexican family is more economically dependent on all of its members across multiple generations than in, say, the United States, so the decision to try a startup will likely affect an entire family, not just the individual entrepreneur. Plus, when a young person is still living with his/her parents (which, different from the U.S., is often true until s/he gets married) it can be much tougher to break from this disapproval and give a startup a chance.”

Mexico, Colombia, Peru & Chile are on the way to creating a large single market (over 200 million people) with the recently ehanced Pacific Alliance. Costa Rica and Panama want in.

I think they call it the Pacific Alliance because Argentina, Venezuela and Brazil are Atlantic nations which are the backbone of the less ambitious Mercosur pact.

It may also be code for “hey Asia, we are open for business”, like our own likely still-born Trans Pacific Partnership.

2. The Tragedy of Argentina: A Century of Decline

5. A new landmark date for repression in Venezuela: confirming the dictatorship

The Guardian’s datablog has a cool post where they attempt to estimate how much of OECD countries’ ODA (official development assistance) is actually transferred to a developing country.

I expected the US to do pretty poorly here, but we manage to get 89.5% of our money out of the country (note the chart lists the % NOT transferred).

Japan is the champ at 92.6%, the average is right around 82%, and everyone but Austria gets at least 50% of their money out the door.

Note that this doesn’t evaluate the amount of aid, just where the ODA money goes.

I’m teaching a master’s level class called Global Political Economy for the first time this semester.  We are participating in a project on Mexican entrepreneurship with the State Department’s Diplomacy Lab.  I had never heard of the Lab before a couple of months ago, but the department is experimenting with crowd sourcing research topics it would like to see answered (note to self: must try this!).

Even though I know a fair amount about the Mexican economy, the current state of entrepreneurship in the country is not something I’m familiar with.  Fortunately, it is something I would like to know more about, so this project will be a good learning experience for me and the students.

I’ve had students gathering sources on the topic and I have done the same.  I decided to see if anyone has asked and answered questions on Mexican entrepreneurship on Quora and found some fascinating answers.  At least in Mexico City, it sounds like the state of entrepreneurship is thriving.  Here are a couple of my favorite Q & As from the site:

Q1: “What is the entrepreneurial ecosystem like in Mexico City? I’ve recently started a trip through Latin America trying to get a feel for the entrepreneurial ecosystems in the region. I started in Mexico City and have posted two of my four interviews there so far. Both interviewees so far have said that they feel Mexicans lack role models and mentors and that there isn’t a vibrant culture of entrepreneurship in Mexico.Is this true? If yes, what do you think can be done to help build such a culture and should those steps be taken?”

The most popular answer was written by M. Chris Johnson, Founder of LatAmStartupBlog.com

He starts by stating something that I think is really important to recognize: “We need to define our terms here — what I assume you’re talking about is tech entrepreneurship (this is my interest as well).   If we’re talking about general entrepreneurship, that’s a different story.  There’s really no shortage of entrepreneurial zeal in Mexico; Mexicans are a hardworking lot and you can see all sorts of entrepreneurship, from people selling things on the street to the ubiquitous abarrotes that are generally mom & pop shops.  However, most Mexicans that are in these businesses don’t seem to consider themselves emprendedores.  They’re just making a living.”

Definitely worth reading his whole answer, but the short version is that he believes the “ecosystem is growing fast, and business conditions in Mexico are also evolving quickly (for the better).”  He points specifically to an event called Startup Weekend, writing that “Last year Mexico had more Startup Weekend events than any country other than the United States. Great companies don’t come from Startup Weekend but it’s a great educational opportunity and I think this is a good indicator of how the level of enthusiasm for technology entrepreneurship is growing.”

Q2: “What’s the future for the Mexican Startup Environment?”

The most popular answer notes that “Mexico is attracting the attention of reputable Silicon Valley investors and funds. Evidence of this was Dave McClure and his partners at 500 Startups agreeing to team up with MexicanVC (The Discovery Fund for Mexican Startups)” and that “MexicanVC evolved from an ambitious idea to a fully functional discovery and investment fund for the most promising startups and entrepreneurial talent in Mexico, in just a few months. They are already finding, nurturing and graduating startups with real potential into the marketplace.”

Some other good Q&As on the topic that are worth exploring:

What are the coolest startups in Mexico?

What are the active startup meetups in Mexico City?

The blog “Africa is a country” has a good interview with Hussein Kurji, the creator of a Kenyan mockumentary of aid NGOs. The show is called Samaritans and it chronicles the daily travails of working at an NGO called Aid for Aid.  Like Seinfeld was a “show about nothing,” this NGO is an organization that “does nothing.”

Here’s Kurji talking about one of the stories of Season 1 that sounds particularly funny: “The major story arc of Season 1 is that Aid for Aid is about to apply for the largest grant that the Nairobi field office has ever applied for. In Episode 2, their first task is to come up with an acronym before figuring out what the grant’s about.”

My favorite part of the interview though was when the blog asked him for the craziest story he’s heard about an NGO.

He replies: “I heard from someone in the US that an organization was having a charity auction to raise money for endangered rhinos and the prize for this charity auction was to go hunt a rhino in Namibia.”

I don’t know how I missed this unbelievable story, but the blog assures readers that this did indeed happen, linking to the Colbert Report and CNN.

Another case of truth being stranger than fiction, or the real world sounding a lot like the Onion.