or at least they might think so thanks to the good word done by canine advocates in Mexico.  I came across an article that talked about the canine companions that join the huge pilgrimage to Mexico’s most important basilica on December 12th. Apparently more than 7 million pilgrims visited La Villa this year and they were accompanied by hundreds of dogs.  The dogs are looking for company and food, while the pilgrims welcome the dogs as company and protection (thankfully, not food!).  When all the people disperse though, the dogs are left hanging around the basilica.  Typically, the authorities would be called and the dogs rounded up and euthanized.

Canine advocacy groups like Mundo Patitas (Little Paws World) is trying to put an end to that generally by educating Mexicans about the proper care of dogs and, in particular, saving the dog companions of the pilgrims.  As one member notes, “Catholic charity generally doesn’t extend to animals. Most Mexicans don’t see dogs as living beings. They either consider them objects or a nuisance. We’re here not just to save the dogs, but also to make people conscious of how to treat them.”  That was pretty much how dogs were treated when we lived in Mexico more than 15 years ago and it sounds like things are changing, but sadly very slowly.  Here is one of the sweet photos from the article; check the article for more of the same:

Check out this awesome sculpture unveiled last week in a suburb of Mexico City:

Titled “Guerrero Chimalli” (Chimalli is Nahuat for shield) it stands 60 meters tall resting on a 10 meter high base.

Here it is:  “Border Patrol in Philadelphia intercepts insect stowaways in cargo from Latin America”

The first thing that caught my eye was “border patrol in Philadelphia.”  I shouldn’t have been surprised but somehow I naively was.

And then I found that the stowaways were insects.  Congrats to the BP.  They finally found some dangerous terrorists from south of the border!

If the insects had paid their papers in order, would it have been ok for them to have entered the country?  Is the problem that they were undocumented immigrants coming to steal American jobs from the hardworking US insects that pay taxes?

People did you know that Vladimir Putin auditioned for the role of Huggy Bear in the TV series Starsky and Hutch?

Me neither, but then I saw this:

And that is what we call indisputable visual evidence.

Pooty could have been an American action figure instead of an evil maniacal dictator.

Hat tip to @AndreGoLow for the first photo!

So the “world’s greatest deliberative body” has passed a sanctions bill against Venezuela for human rights violations during the previous election campaign there?

And this is in the lame duck session before the Republicans even take over?

After Ferguson and Staten Island, the Feds decide to act against……Venezuela?

Ummm, Knucky? That’s not quite how it works, pumpkin.

How sanctions become law, Knuckles Maduro edition: 1. passes both houses of congress. 2. signed by the president. 3 goes to the intended sanctionee for a referendum.

Since Venezuela needs to sell us their crappy low quality oil more than we need to buy it right now, I’m guessing the sanctions will happen, Knuckles will make some political hay, and everything else will be business as usual.

Glad to see the Feds send such a strong message against state sanctioned violence against unarmed citizens though.

Our government makes me sick.

At least Mexican politicians have their priorities straight.  As the news out of Mexico gets increasingly worse, the leaders of the three main political parties are spending time thinking of creepy gifts for senators.  What do you get the senator who has everything?  A piece of white chocolate with his or her face on it, of course.  Who wouldn’t want to bite into their own head this holiday season (although it could be fun to bite the head of your senatorial nemesis).

The gift givers assured the public that this lovely gift was paid for with personal funds, although I still don’t think that makes the story any more reassuring.  Here are some photos of this wonderful gift: 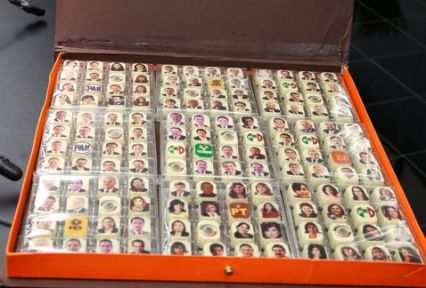 The Latin American Herald Tribune posted an interesting piece the other day with the awesome headline “Anti-Corruption Campaign Reduces Interest in Civil Service in China.”

I guess that’s one way to gauge how well the anti-corruption campaign is working, although there are clearly other factors at work.  There were 22,000 government jobs available this year and 1.4 million people enrolled to take an exam to try to get one of those jobs.  This is down from 2013 numbers, which were also lower than 2012 figures by 130,000 test takers. Despite the decrease in test takers, I would say that the demand for civil service work is still pretty competitive!

President Xi has worked to make high posts less attractive, by reducing benefits such as “unnecessary banquets, gifts, first-class flights and other perks.”

While the official media is using the decrease to highlight the efficacy of the anti-corruption campaign, there are some other factors which should be noted.  For instance, to qualify for some of the jobs, test takers must now have 2 years of experience at a post higher than the provincial level.  Also, the article notes that “Over the past few years the duties of civil servants and senior officials have toughened to such an extent that some have died of exhaustion or committed suicide due to stress.”  Wow, that’s not what you usually think of when you think of the civil service.  That has to discourage potential job seekers!

A recent article in Reuters talks about a new college course offered in Venezuela called “Studies of the Thoughts of the Supreme Commander Hugo Chavez.”  It was created by the military and so far more than 10,000 students have enrolled.  There are so many howlers in the article (even the name of the class is awesome) that I decided to just list my favorites:

1. “Students rise to their feet as a uniformed Venezuelan brigadier-general enters a large classroom at a Caracas military institute and proclaims: ‘Chavez lives!’ In unison, they reply: ‘The fight goes on!'”  Of course they do!  This seems appropriate for a college class.

2. “The course, which can form part of a degree or post-graduate studies, traces Chavez’s philosophical roots.”  And this is part of a degree or post-graduate studies?  Check out the incredible rigor of the course provided by this description: “The class analyzes Chavez’s boyhood in a rural shack, his love of baseball, his years in the military and failed coup attempt, the election victory that brought him to power, and the 1999-2013 presidency”

or this (unintentionally hysterical) description by this student: “Victor Flores, a military colonel, said he specially enjoyed learning personal anecdotes he had not heard before – about Chavez’s grandmother Rosa Ines, and another distant relative and revolutionary known as Maisanta.”

3. “‘At all times, he [Chavez] sought to imitate Christ in his actions,'” said Nerio Galban, secretary of the Bolivarian Military University of Venezuela where the course originated. Galban likened the Biblical story of Jesus feeding the five thousand to Chavez’s subsidized food programs. He compared Jesus’ healing of the sick to the “Miracle Mission” set up in 2004.”  Kevin says at this point Hugo has only miracle left in his bag!