Thanks to The Guardian, which has a tremendous slideshow up this morning on Putin’s teenage fan club.  The photos are the best part but some of the comments are hysterical too.  Here are some of my favorites:

“I like how Putin treats his children and wife, I think he’s a great husband.”  Didn’t Putin cheat on his wife for years with an Olympic gymnast and then recently divorce her?  Here is the fangirl in question:  (she seems like a well-balanced teenager)

“Putin is my hero, he inspires me, adds science to my actions.”  Hmm, science to her actions?  Scientific socialism?  Scientific kleptocracy?  Scientific imperial aggression?  Here’s our budding scientist in a t-shirt with Putin’s face in the moon.  wow! 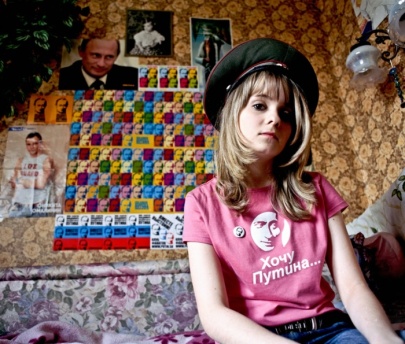 Vika says “Putin is like God to me. I perceive him as daddy. He is a perfect man – politician, sportsman, family man. I want my husband to be like him!”  Another well-balanced individual. She wants a husband that cheats on her and then leaves her for a much younger, athletic type?  Maybe she should check out this guy:

English is a hard language to learn. No doubt about it, but this is kind of bad:

“A recent survey by Mexicanos Primero, an education NGO, found that four-fifths of secondary-school graduates had “absolutely no knowledge” of English, despite having spent at least 360 hours learning it in secondary school. English teachers were not much better: one in seven had no English whatsoever.”

The article details the usual problems, too much focus on written grammar, no conversation, teaching to the (written) test.

I learned Spanish the fast but very hard way, by moving to Mexico and taking a job that required me to speak it all day long!

About a month before we started work, Robin and I enrolled in a spanish language school in our neighborhood of Polanco. Robin tested into the very top class. I was put in a class where they showed you pictures of a cat, you said “gato”, and they gave you a cookie!

But forced immersion worked and I was soon getting through teaching 90 minute economics classes (though unscripted Q and A in that first semester was really terrifying to me).

If any of you are looking for a less intense way to learn some Spanish, I’d suggest the cool, free, Duolingo app.

Simon Romero (@viaSimonRomero) tweeted this picture of a book at a Caracas bookstore:

“War is peace” and “Voices of Liberty” come from Chavez, Jesus, Simon Bolivar, Mao, Ho Chi Minh, Che Guevara, Gandhi, Fidel Castro.  Huh, that’s quite a grouping.  How did Jesus and Gandhi end up with this crew?

Mexican officials often bemoan the fact that American media focuses too much on the negative when it comes to reporting about the country.  Here I pile on:

1. Watering down transparency laws in Mexico (in Spanish)

2. Watering down the new education reforms by agreeing to “pay salaries and bonuses owed to a group of public-school teachers who are not on the official payroll.”

3. “Amid wave of thefts, Mexico won’t ship gasoline in pipelines”

There’s even a support group that meets:

One of the participants at the Kawasaki meetings, Sumie Maekawa, says she and her husband, who have no children, see their Aibo as a daughter. Ms. Maekawa, who is 72, talks to the Aibo every day, travels with it and makes clothing for it. She and her husband agreed that whichever of the two lives longer should be cremated alongside the dog, which also is named Ai, in expectation of a family reunion in the afterlife.

“I can’t imagine how quiet our living room would have been if Ai-chan wasn’t here,” Ms. Maekawa said, using an honorific suffix applied to girls’ names. “It will be sad when the day finally comes when Ai-chan is unable to stand up.”

Mr. Norimatsu  (a free lance robot repairman) has begun collecting broken Aibos from owners who have died, in the hope that their remains can be used to help keep other robots running. He recently brought 18 of them to a temple in Chiba for a ceremony aimed at reuniting the robot dogs’ spirits with those of their owners.

In the US we horribly euthanize tons of unwanted living pets, while in Japan they rage against the “demise” of robot pets. There’s a metaphor in there somewhere.

A recent blog post by Grieve Chelwa claiming “Economics has an Africa problem?” has been getting some attention.

He concludes eloquently, “By physically locating these meetings in places far away and disproportionately underrepresenting African-based scholars on journals’ editorial staff, the view is affirmed that the answers to Africa’s problems and the storylines of Africa’s past can only be weaved elsewhere under the leadership of western scholars. Economics as a discipline is sending a clear message: Africa cannot be a leading participant in the debates that ultimately shape its destiny. Is there any other interpretation that one can give to this?”

First, let me say that we are all lucky that articles in development journals do NOT “ultimately shape” the destiny of any continent.

Second, what I think many African nations have is a higher ed competitiveness problem, in that on average, salaries and benefits for productive scholars are notably higher in the US and Europe than in most, if not all, developing countries. One could make a good argument for boosting the endowments/funding for institutions of higher education in the developing world, but one could also make a good argument that other priorities are more important and that given path dependence and local agglomeration effects, it’s unlikely that the dominance of the top western universities would be reversed.  Thus top scholars from many African nations end up working in Universities outside the African continent. In my opinion, that does not make them non-African.

Third, I do think economics has an Africa problem in that we have little to say to African nations about how they can reliably create sustained economic growth. Morten’s post is good on this issue.

Fourth, is it tone-deaf and unfortunate that the Journal of African Economies does not have any editorial board members from universities located in the African continent? Oh hell yes. It’s ridiculous. But I don’t see how one can then leap to where Chelwa leaps.

Finally, I don’t think a geographic quota for editorial boards or journal pages is a very good idea. I should emphasize that Chelwa does NOT call for this, but quotas are the only obvious remedy that I can see for his complaint and they would have to extend beyond African countries to other developing areas of the world as well.

China’s most popular search engine, Baidu, has created a heat map demonstrating the enormous exodus of people from the big cities to their hometowns for the New Year.  To give you an idea of the magnitude of the migration, even though the New Year doesn’t start until Thursday, 80 million people started heading home on Monday.

The Telegraph reports that “If someone uses a Baidu app in Beijing in the morning, then pings from the southwestern city of Kunming in the evening, a new trip will be registered and a straight line added from Beijing to Kunming. Lines glow white-hot during the biggest travel days of the holiday, which officially runs from Wednesday through Feb. 24 but unofficially includes many days on either end. The period of heightened travel is considered 40 days long.”

Here is a picture of Monday’s migration:

Here is the link to the real time map, for those of you who’d like to try your luck (I’ve tried four times and the site seems overwhelmed by visitors).

Not everyone is so anxious to get home, however.  The Washington Post, in an article titled “For unmarried, Chinese New Year brings dreaded parental nagging,” tells of the dread many unmarried Chinese feel about the prospect of going home.  Apparently there are manuals for how to deal with nagging parents and even rent-a-boyfriend businesses for particularly desperate young folk.

Thanks to @Amazing_Maps for another great map.  This one gives translations of Chinese names for European countries.  They tend to be phonetic representations of their real names, but the results offer up some howlers.

Here are a couple of my favorites:

The Phi Gamma Delta fraternity at the University of Texas is in trouble for throwing what it calls a “Western-themed” party.  Others have labeled it a racist border patrol party.  Here is some evidence of the latter:

A USA Today article reports that “Students were dressed in ponchos and sombreros. Some wore construction uniforms with Hispanic names written on them, while others donned military uniforms.”

The New York Daily news adds that “Among an array of south of the border props and costumes seen adorning the event, some costumes reportedly included hats with the names “Jefe” and “Pablo Sanchez” written across them as well as other partygoers wearing military camouflage outfits.”

University officials are not amused.  Here are a couple of photos that have leaked out: 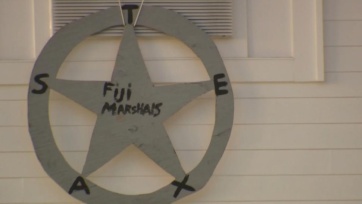 Tyler Cowen gave a talk here on Monday night arguing that the myth of the rational autocrat is ending.  The world experienced a nice period where many autocrats behaved semi-rationally and could be dealt with.  There is no reason to think that pleasantness will continue, however.

Exhibit A is Europe’s biggest thorn in the side, Vladimir Putin.  He was in Egypt yesterday bearing gifts.  Here he is offering President Al-Sisi a Kalashnikov.  I’m not sure why this was the gift he chose, but I have a hard time swallowing the manufacturer’s new PR campaign to rebrand the rifle as “a weapon of peace.” 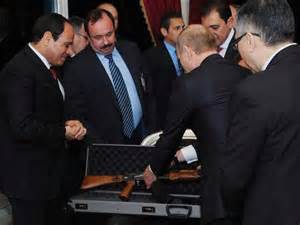 And what did Putin get in return?  For starters a lot of manufactured adulation and press, something he is probably not getting as much of at home these days.  The streets were lined with his photos and the state-run newspaper praised his “glowing intelligence.”  Ha!  “Glowing” is a curious adjective to have chosen.  Here is Pooty-poot glowing all around Egypt! 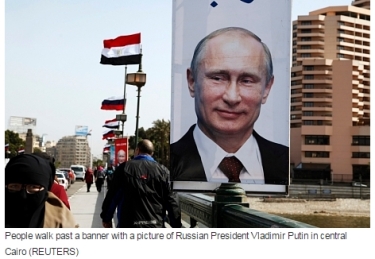