Under this high standard, this upstanding citizen should be deported immediately: 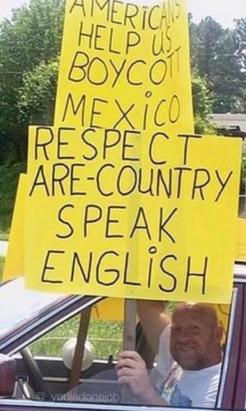 Not sure if Mexico would take him though.  He seems so pleased with himself, totally unaware of the awesome irony of his well-crafted poster.  Trump, I think I found another one of your supporters.

h/t to _youhadonejob, one of my favorite tweeters.

For any Spanish students hoping to improve their grammatical skills, I’d recommend joining Acción Ortográfica, a Ecuadorian group that corrects the grammar of graffiti around Quito.  This looks like the most fun way imaginable of learning the rules of Spanish grammar.

The group takes their name from a poet graffiti organization that was founded in Mexico in 1966:  Acción Poetica.  According to Mental Floss, members of this movement”have been graffiting love poems and quotes about friendship and optimism across Latin America for decades,” but not always in the most grammatically correct ways.  Here’s an example of Acción Ortográfica in action: 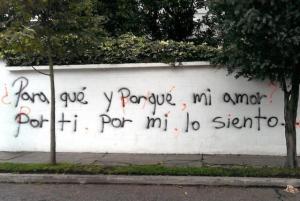 Obviously the police don’t care whether you are creating graffiti to post love poems or correct grammar–either way is still illegal, so members must work at night.  They have shifted to a possibly even more dangerous game of late, correcting the temperamental and volatile President Correa’s tweets.  From this example, it seems like he needs the help:

While they claim that they only care about good grammar (and aren’t attacking Correa politically), we know how little of a sense of humor Correa has (especially about himself).

I just came across this interesting paper by Ashraf, Bau, Nunn & Voena on the upside of bride prices.

Now, I and I think a lot of people, have the intuition that the practice of bride prices is unmitigatedly bad. It feels exploitative, degrading, and just yucky.

These surprising results are found both in Indonesia and Zambia leading the authors to conclude that,  “while there may be significant downsides to a bride price tradition, our results suggest that any change to this cultural custom should likely be considered alongside additional policies to promote female education.”

Their larger point is that, “our findings also highlight the importance of the cultural and social norms of a society, and how they can be critical in determining the success of large-scale development policies.”

Interestingly, this U of Chicago piece on one of the authors suggests that the idea for the paper came from unsolicited comments from Zambian parents saying that increased education of daughters raised their bride price.

One question that I had which the paper doesn’t seem to address (I say “seem” because it’s 52 pages and I read it in like 20 minutes) is what is driving the demand side of the market? Why do men pay substantially more for educated women in these societies? The premium can be very large, in Indonesia, the premium for a college degree is like 100%. Is this just assortive mating? Educated men want educated women and educated men are richer? I also wonder what is the social benefit of female education in cultures where it is used to sell off daughters for a higher price.

at least not if you are EPN:

comment from the peanut gallery (aka Mr. Angus) :  “at least he got lei’d for his birthday”

and I’m not actually talking about El Chapo’s (second) escape from a “high-security” prison in Mexico.  No, this time it’s Pemex that is providing the hilarious incompetence via an article called “12 Ridiculous Things We Learned About PEMEX’s Insanely Expensive Safety Videos.”

Let’s start with the fact that Pemex has a terrible safety record.  According to the article (and the Reuters investigation upon which it is based), “Mexico has the worst injury rate of all major oil-producing countries.”

Instead of fixing the situation through better worker training, management instead decided to “spend over $40 million to make cheesy safety videos filled with bikini-clad telenovela stars and low-budget special effects.”  Wow, what a great idea for a company that supposedly is trying to get its act together.  Management decided this was a better use of money than actually providing more safety training and apparently a lot more fun for the workers (according to one safety official, “If a woman comes out in a bikini, it is like salt and pepper for the oil workers.”)  Alrightly then.

And how do you manage to spend $40 million on safety videos.  Excellent question.  The article notes that:

“At least part of the budget went toward hiring nine pre-production staffers, 10 stunt doubles, four drivers, two areal cameramen, 37 miscellaneous crew members, actors and extras and mediocre green screen technology. It is not entirely clear where the rest of the money went.”

That last line is classic Mexico. 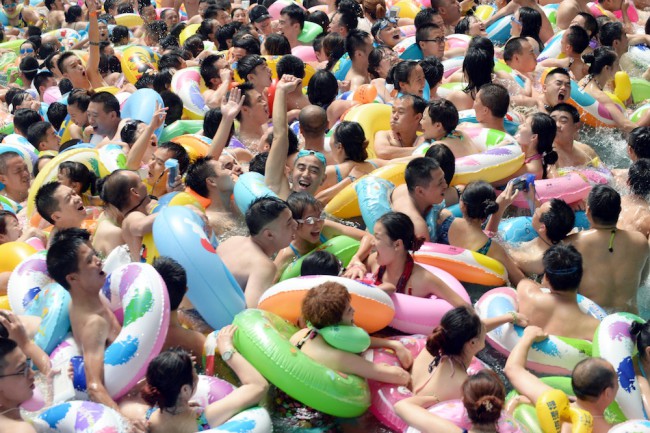 SUINING, CHINA – JULY 11: (CHINA OUT) Visitors crowd at Chinese Sea of Death tourist resort in Daying County to escape high temperature on July 11, 2015 in Suining, Sichuan Province of China. Most parts in China ushered in hot weather in July and more than eight thousand visitors from every corner of China crowded to China Sea f Death to enjoy the cool. (Photo by ChinaFotoPress/Getty Images)

Yes, Bolivia is again a sea-faring nation thanks to Argentina’s transformation into an ocean of tears following their defeat in the Copa America finals!

The Lord works in mysterious ways.

(note that the map comes from eldeforma.com the Mexican equivalent of The Onion!)