The first time I visited Mexico, I instantly fell in love with the bright, beautiful colors of many of the houses and commercial buildings.  I had never seen anything like it and I thought it was a wonderful expression of creativity and joy.  Apparently I’m not the only one.  The FT reports that a group called Germen Crew, an initiative by the federal government, is breathing new life into poor barrios by hiring locals to paint them in technicolor.

The article highlights the changes in a neighborhood called Las Palmitas, which only 7 years ago had no electricity.  I was wondering how the group got buy-in for the paint job, but apparently the crew “spent months getting to know residents before the painting began, attending town meetings to discuss colours and workshops for children.”  It’s important to note too that the house painting is only one leg of the program, which also includes more policing (and video surveillance cameras to fight crime), increased help to start up businesses, and funding scholarships for high school dropouts.

Gang rivals joined together in the painting initiative.  As one gang member stated, “somehow, we worked together.”  The government cites a “79 per cent drop in the crime rate in the first half of this year, compared with levels in 2012.”  I’m not sure why the comparison year is 2012 or if this can totally be attributed to the Germen crew, but you cannot argue with the visual results, which are stunning.  Check the article for more incredible photos. 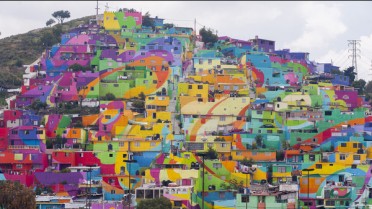 One thought on “Put a Bird On It”