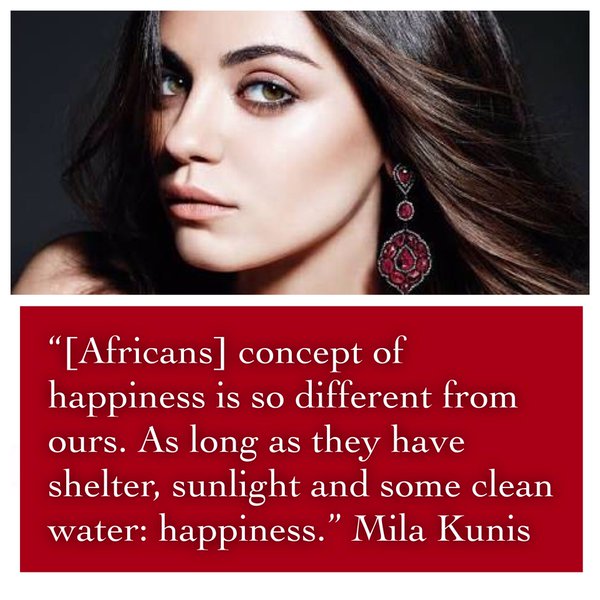 It’s hard to know where to start with such an insulting and stupid statement.  According to  Mila, we don’t need to worry about African underdevelopment because Africans are already happy as they are.  They only need “some” clean water you know.

This quote was from an article last year in The Telegraph.  In it, she talks about pairing up with an ethical mining company in Zambia and Mozambique (hence the rubies in the photo above).  She was especially impressed with the fact that the company had a policy of not using child labor.  Here is what she had to say:  “My husband’s foundation in the States, Thorn, is against child [exploitation]. After having my own child, it puts it all into perspective. The idea of her at the age of nine having bleeding sores and working 20 hours a day for pennies… It’s pure slavery.”  I love how it took having her own baby to put things in perspective.  Actors weighing in on economic topics are easy targets;  what bothers me is not her views per se but the idea that anyone would assume she speaks with any authority.  It’s not that being an actor discredits you from speaking intelligently on important topics, but it shouldn’t give you an automatic platform either.

Anyway, the Mail & Guardian from South Africa has an article today about blood rubies (unfortunately, it’s gated).  The gist of it is that this so-called “ethical” company that Mila is ambassador for is actually not so ethical after all.  The title of the piece is “Villagers digging for rubies were shot and left to die.”  In Mila’s estimation, as long they had some clean water and sunlight, they probably died happy.

One thought on “African underdevelopment solved”