Good news coming out of Canada yesterday for Mexico.  The Canadian government has dropped visa requirements for Mexicans visiting the country (and Mexico, in turn, has agreed to lift its ban on Canadian beef).

The highlight for me was the photo op of the two leaders jogging together.  Here’s one photo:

I wonder how presidents decide what to wear for such occasions.  The black short shorts are an interesting touch. Hey EPN, the 70s called and they want their short shorts back!

At least no one is accusing el Presidente of putting his socks on backwards this time (the hilarious Sockgate scandal from last August).

Despite my blog title, I don’t think this motivational trainer in China was actually trying to nudge his clients.  Even so, the idea that this trainer was trying to provide “motivation” is pretty funny.  Here are some of the details:

“A motivational trainer in China beat eight rural bank employees with a stick, shaved the heads of the men and cut the hair of the women after they performed poorly on a training weekend.”

Employees around the world who have bitterly complained about having to go through training weekends are rejoicing that they didn’t get this fool as their “motivator.”

What does Jiang Yang, the fool in question, have to say for himself: “‘Spanking was a training model I have been exploring for many years.’”   Dude, you are really not helping your case!

Oh people, the plot thickens in Argentina. Our last story was about the ex cabinet minister throwing suitcases full of money over the walls of a nunnery.

In that story I speculated that the nunnery was a known money-laundering operation.

Now, thanks to a “dollar-smelling dog” named Jack, Police have discovered hidden chambers under the chapel of the convent that apparently smell like dollars.

I think I’ll set up a table down in the Santa Fe Plaza and start telling people their futures. Paco can be my dollar smelling dog.

PS: It’s a sad but true commentary on Argentina that they are not called “peso-smelling dogs”.

People, check out the amazing transformation of one Jose Lopez. 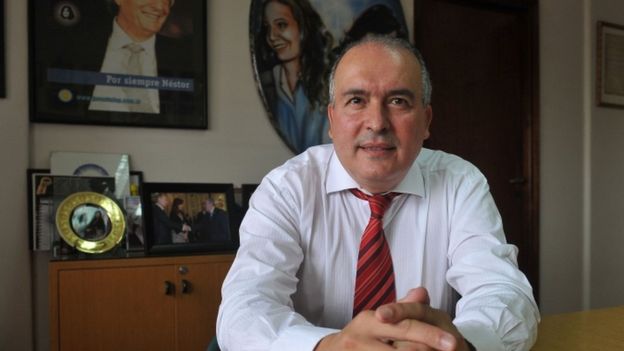 J-Lo was was public works minister under La pinguina.

But baby look at him now:

Well, it has something to do with $7 million in cash, a .22 rifle and a nunnery!

In a nutshell, J-Lo was caught tossing the cash over the walls of the nunnery while holding a rifle, when the nuns called the cops!

Not sure what his end game was going to be.

Is that nunnery a money laundering operation?

Was he planning on also climbing the wall and then screaming “SANCTUARY!!!”

This just in from Colombia:

A bill to financially punish chronic absenteeism in the Legislature died due to…….

…… not enough legislators being in session to debate the bill!!

So many ideas here. 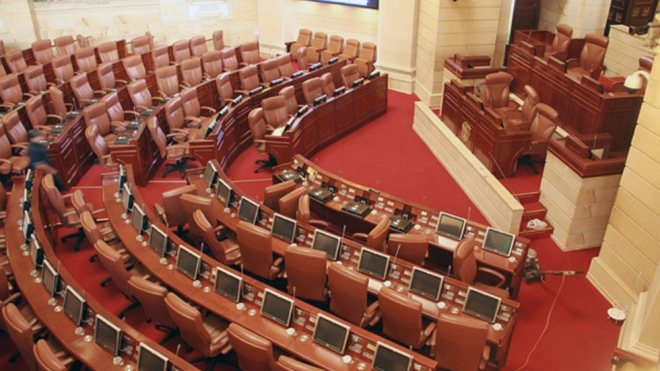 From Duncan Tucker (‏@DuncanTucker), who tweets “Came across this road in San José del Castillo, Jalisco, yesterday. Urban planning at its finest.”

The speed limit painted on the road right before the series of electrical poles is an especially nice touch!  Perhaps the municipal government doesn’t want people to hit the poles going anything more than 30 mph.

Maybe I’m being duped by some inter web sharpies, but if not, LG is producing a TV that also repels mosquitos! 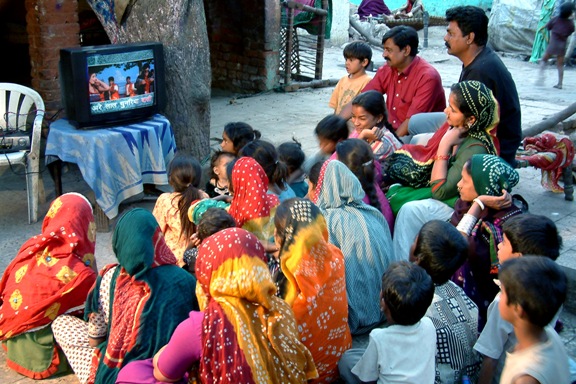 These wonder-boxes start at around $400 (at current exchange rates).

I didn’t think India really had a malaria problem but apparently, actual malaria fatalities in India are a large multiple of the official statistics.

Of course you know I’m talking about planting banana trees, right?  Kenyan boda boda drivers, tired of empty promises by politicians to repair a road, have come up with an ingenious way of protesting.  They are planting banana plants in the road, arguing that if the government cannot bother to keep it up, they might as well turn it into farmland.

h/t to @kenyapundit, who tweeted the photo with the question: “Why are we struggling with such basics?”

Ken Opalo (@kopalo) wins the internet this morning with a reply that is both correct and poignant:  “Because we are all about shiny things. Leapfrogging our way back to 1600.”

Tyler points us to an interesting paper on how getting tenure affects the frequency of publication and the citations to published pieces. The paper is trying to examine the often used rationale for tenure that it allows you to take risks. As the paper and Tyler both point out, the risk that many tenured profs take is that they can stop doing work and still keep their jobs!

They studied publication frequencies and citation counts from 1996 to 2014.

They found most “home runs” came before tenure and that post tenure, profs produced fewer pubs and fewer citations to those pubs.

My “home run” was my 1989 paper with Gordon Tullock.  It was cited fairly lightly for the first 10 years post-publication, not hitting 50 cites per year until 2004,  15 years after publication! Cites to the piece peaked in 2013, but it is still getting cited (64 times in 2015).  So the time frame in the paper may be too short. Papers in their sample published in 2005 or later don’t really have the time often needed to create a big pool of citations. Especially if the piece is weird or “risky”.

Tenure also relaxes constraints. When Robin and I moved to Oklahoma, she was untenured and we decided not to work together during her probationary period. After she got tenure, we resumed co-authoring and produced 3 Journal of Development Economics papers in 5 years. That got Robin promoted to full, and then she started on her (risky to me at least) project that culminated in her Cambridge book that came out last year.

Many ambitious academics will keep playing the game past tenure til full. Then I think they may well try riskier things, but by then they are probably 40+ and their best brain days may well be behind them.

I actually think making promotion to full much tougher might get us more risk-taking researchers.

I also think that stringent tenure standards encourage researchers to concentrate their efforts during a time when their training is the freshest, their spirits are the strongest and their brains are at their sharpest. Then when they are broken down we give them tenure and put them out to pasture. It’s only fair.

Depressing photo of the day comes from @sheikhimaan: