Aeromexico has had to backpedal furiously as a backlash has formed against their recent casting call for a commercial.  In the call, they ask for “nobody dark skinned”, only actors with “white skin.”

According to the Washington Post, the casting call was even more specific:

This has me curious as to what the “government look” looks like.  Apparently it’s well known enough in Mexico that they expect applicants to understand the phrase.

When Kevin and I lived in Mexico, discriminatory job ads were relatively common.  We often saw job postings specifying gender, age, and aspect.  While the Aeromexico example is unfortunate, I also see it as positive in that there has been so much societal backlash against the racism in the ad.  That seems like a step in the right direction.

In a recent Boston Globe article, “Lima: Where the pallbearers are black,” I learned that there is a long racist tradition in Lima of only using black pallbearers.  Apparently, the custom started in colonial days, when the elite typically had many slaves in the household.  According to a historian of Peru’s slave trade, Maribel Arrelucea,  ‘‘to have one’s body carried by a black is understood by many to be a symbol of prestige, just as it was in the colonial era when the aristocrats of Lima went to church accompanied by a slave.’’ 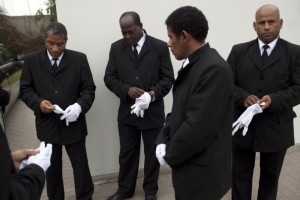 While the tradition never took off in any other Latin American country (or even other part of Peru), it still seems to me a mark of prestige in Lima.  I didn’t even realize that being a pallbearer was a full time job, but apparently it is in Lima.  The city has “about 50 pallbearers, organized into teams, and each man earns $5 per burial or about $70 a week, the equivalent of minimum wage. They are contractors, not funeral home employees, hired on a per-job basis with no benefits.” {Sidenote: how can there only be 50?}

In an ironic moment, Peru’s “most prominent funeral director,” refuted claims that only employing blacks as pallbearers is somehow racist.  His reasoning:  blacks know better than  “laughing or making faces’ at funerals. ‘‘

While it is considered a mark of elegance and honor to have black men serve as pallbearers, the men who get into this line of work do so because of a lack of other opportunities.  The article notes that around 10% of the Peruvian population is of African descent, but only 2% of that population attend college.  There are almost no blacks amongst the Peruvian elite (either in the government or in the private sector) and almost all work in manual labor jobs like in the sugar cane plantations by the coast.

I don’t think the answer to the problem is simply to prohibit blacks from being pallbearers, but a recognition of the tradition’s racist past as well as a plan to promote opportunities for blacks would be a step forward.