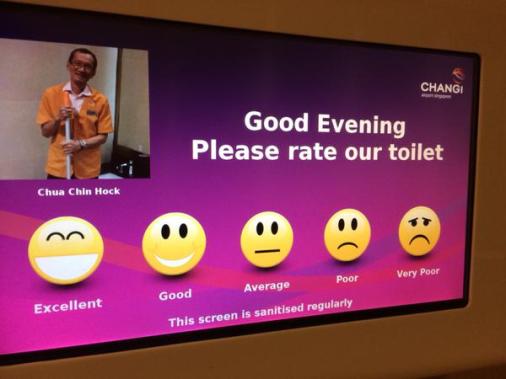 Wait, is there only one toilet at this hotel?  When I’m staying at a hotel I like to think of it as “my toilet” not “our toilet”!

This is so awesomely Singaporean, especially the line at the bottom about the sanitized screen.

In my Global Economic Relations course, we are currently discussing the economic benefits of free labor mobility.   One of the students mentioned that a lot of rich countries have low birth rates (often under the replacement level) and used Singapore as an example.

I explained to my students the creative (and often racist) ways in which the Singaporean government has encouraged people to have more babies. As noted in this 2006 article, Prime Minister Lee set up an institution in 1984 called the Social Development Unit (a perfect year to create such  an Orwellian sounding agency), which would find innovative ways to get young people to procreate.  He was worried that the well-educated women (who typically were of Chinese heritage) were not having babies, while the lesser educated women of Malay descent were procreating much more rapidly.

So what did the SDU try?

1. “Increased financial incentives to encourage bigger families, amounting to cash gifts of S$3000 (US$1889) for the first child and savings of up to S$18,000 each for the third and fourth child.”

3. Tax cuts on maids plus more childcare and maternity benefits.

4. “Offer graduate women with three children priority in securing places at the top nursery schools, an advantage in helping children get ahead at school, university and in the workplace.”

5. Set up “love cruises” for singles!

6. “Speed-dating and online dating services, along with an agony aunt called Dr Love.”

Somehow all of those awesome ideas didn’t make Singaporean couples want to procreate.  So now the government has paired up with Mentos (huh?) to urge citizens to do their patriotic duty and make babies on “National Night.”  You truly cannot make this stuff up.

Here is the article on this awesome new campaign, but even better is the video itself.  Check it out in all its glory.  Wow.

I guess just allowing more young people to immigrate there is out of the question?