A couple of interesting papers on the evolution of central banking as well as a fun WSJ piece on how bombastic metaphors have taken over discussions of CB actions.

“This paper offers a historical perspective on the evolution of central banks as lenders of last resort (LOLR). LOLRs established prior to World War II, with few exceptions, followed policies that can be broadly characterized as implementing “Bagehot’s Principles” : seeking to preserve systemic financial stability rather than preventing the failure of particular banks, and limiting the amount of risk absorbed by the LOLR as much as possible when providing financial assistance. After World War II, and especially after the 1970s, generous deposit insurance and ad hoc bank bailouts became the norm. The focus of bank safety net policy changed from targeting systemic stability to preventing depositor loss and the failure of banks. Statutory powers of central banks do not change much over time, or correlate with country characteristics, instead reflecting idiosyncratic political histories.”

Anne Murphy, “The Bank of England and the genesis of modern management.”

“This paper focuses on the Bank as a site of precocious managerial development. It first establishes that the Bank, by the latter part of the eighteenth century, encompassed the complexities of a large-scale industrial enterprise. It employed a workforce of several hundred. Its workers operated in specialised and coordinated capacities. Its managerial hierarchy was diffuse and dependent on employed men, rather than the elected directorate.  It [the paper] will demonstrate that, although not always applied effectively, the Bank’s senior men did show managerial innovation and skill in training and organising the workforce and were able to make informed decisions which had the potential to improve some of the Bank’s processes.”

“Since the crisis, an analysis of the Factiva media database shows, references in monetary-policy articles and blogs to artillery-related words—including bazookas, powder and firing blanks—rose to 7,300 in 2015 from 4,600 in 2010, although that’s down from more than 11,000 in 2011.”

The words “Central Banker” are not usually used in the same sentence as “kamikaze”–until now, that is.  From this Reuters report, it sounds like Ukraine has an interesting Central Bank chief at the helm.  Her name is Valeriia Gontareva and here are some of my favorite bits of the article:

1. “Every day dozens of people chant “Gontareva! Resignation! Prison!” outside her office in Kiev. Prosecutors have launched a criminal investigation into the fall of the hryvnia currency.”

2. “One political party in the governing coalition unfurled a banner behind the speaker’s chair in parliament. “Sack Gontareva, the looter!” it read.”

3. “The bank is doing everything it can to squeeze the market and prevent importers buying currency,” said one bank trader. “Now, all (import) contracts need to be confirmed, and the bank is confirming them in a lackadaisical way. To call this skilful central bank policy is out of the question.”

4. “Poroshenko knew that she could go ‘kamikaze’, that she had to take unpopular painful measures,” said an official close to the president.”

6.  “Gontareva told online newspaper Ukrainska Pravda on Monday that she had received words of support from abroad, including from IMF chief Christine Lagarde. “They said I’m really great, that I took on an incredible challenge.”  Hmm, I buy the latter part of the statement, but I’m not sure about the first part.

Here’s a photo of angry legislators hurling fake dollars at the CB chief–that counts as high drama for central banking:

The Economist recently had an article about Nigeria’s former central banker governor, Sanusi Lamido Sanusi.  Sanusi, if you recall, was fired by President Goodluck Jonathan in February after being too outspoken about “government corruption and presidential ineptitude.”  I’m guessing President Jonathan really didn’t like the ineptitude comments from his appointee.

So where do you go after you’ve been fired from the Central Bank?  If you’re Sanusi, you become elected as emir of the northern state of Kano, making “him the country’s second-highest authority in the Muslim north after the Sultan of Sokoto.”

The Economist helpfully gives a brief job description of an emir:

For centuries before the British imperialists arrived in what is now northern Nigeria, the emirs ruled as kings. Today they hold little constitutional power, but their influence is still huge. They act as peacemakers, rally public opinion, preserve religious tradition, and endorse political candidates. On paper, they are neutral.

I’m not sure how many of the job skills as CB governor would transfer to being an emir.  They seem like a totally different set of skills, especially since Sanusi wasn’t known for being a “peacemaker” or “neutral.”  Based on recent photographs, he does seem to have fully embraced his new job though.

and here he is as emir: 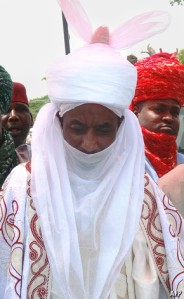