I learned two funny facts this morning about Saudi Arabia.  First, the government is running for the UN Human Rights Council.  Oh the irony. It’s hard to know where to start with that one!

But it gets even better than that folks.  The second fact is that the brochure advocating their candidacy cites women’s rights in SA.  Seriously–you can’t make this stuff up.  And look at the photo that goes along with the supposed women’s rights:

Besides the photo, there are some really funny statements in the brochure, like “The Government allows women to achieve a number of accomplishments.” [my emphasis on the most insulting parts of the sentence]

Also, there is the ridiculous statement that “Saudi law does not differentiate between men and women. This ensures them freedom of action and the running of their own affairs independently and without any restriction.”  Even if that were true, which it is absolutely not, the statement is incredibly insulting and patronizing.  The government lets women run their own affairs.  Gee thanks.

h/t to Hillel Neuer (@HillelNeuer) for this morning’s irony fail.

The NY Times has a video on the plight of Mexico City organ grinders.  Apparently, “[they] say they are losing popularity. They face more competition and a younger population that does not appreciate their music.”

Based on the video below, I cannot imagine why young people aren’t appreciative.  Seriously though, that is some of the worst “music” I’ve heard.  I didn’t have high expectations when I clicked on the video, but it is much, much worse than imagined.

Mexico boasts an amazing pop and rap music scene so it is no wonder young people wouldn’t be too impressed with these guys.  The real question is how it was possible that this sound was ever popular (especially when the guy doesn’t even have a monkey)?  Thankfully the market has spoken–I just hope the government doesn’t step in to subsidize the lost art of organ grinding! 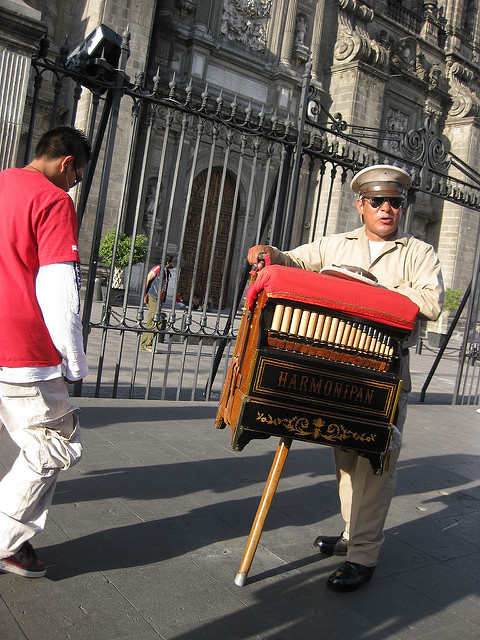 If I were the Ugandan Minister of Tourism, I would have little trouble advertising the country to tourists.  Kevin and I went there several years ago and for anyone who is a fan of wildlife, it is a true paradise.  We saw lions climbing trees, we trekked with chimps, we saw gorillas in the (awesomely and correctly named) Bwindi Impenetrable Forest, we saw an amazing diversity of birds and animals cruising the Kazinga channel.

One thing we didn’t see (thank goodness) was unhygienic mass circumcision of teenage boys.  That is the Ministry of Tourism’s great plan of how to lure more tourists to the country!  Seriously! Lions, no; chimps, no; gorillas, no; adolescent abuse, yes!

“The Uganda and Kenya Tourism boards are looking to turn the tradition into an attraction. They have agreed to jointly promote Embalu circumcision ceremonies in Eastern Uganda and Western Kenya. President Yoweri Museveni himself has encouraged this ritual. He said it fits in well with today’s modern society where all men are encouraged to get circumcised for health purposes.”

This might be my favorite line: “Tourism experts intend to market the Embalu festivals across the world using Ugandan embassies in the hope that the ceremonies will bring in additional tourists.”

My take: time to find some new tourism experts!

Here’s a photo we took of our time there:

That would be a lot better for tourism promotion than the following:

ABC, in a news article yesterday, quoted Trump from January saying about Mexico “We send them practically nothing and Mexico is the new China. I hate to say it. The Mexican leaders are so much smarter than our leaders.” There is so much wrong with that statement that it’s hard to know where to start.  But it’s even more ironic given the recent news out of Mexico about President Peña Nieto plagiarizing almost one-third of his law thesis.

Here’s the Huffington Post on the scandal, “Of the 682 paragraphs that made up the 200-page thesis, titled ‘Mexican Presidentialism and Alvaro Obregon,’ 197, or 28.9 percent, were found to be plagiarized. In a statement, government spokesman Eduardo Sanchez sought to play down the accusation of plagiarism, instead calling the omissions “style errors.” He added that Peña Nieto met all the requirements needed to graduate as a lawyer from Panamerican University.”

I love the government spokesman’s excuse.*  I’ve only seen bits and pieces but as a professor with a lot of experience (unfortunately) of spotting plagiarism, I can assure you that we are not talking about “style errors.”  Nice try though.  I wonder what the higher-up at Panamerican University think about Sanchez’s last statement now that the plagiarism has been revealed!

Compare that to Obama’s educational pedigree (from Wikipedia): “Obama is a graduate of Columbia University and Harvard Law School, where he was president of the Harvard Law Review. He was a community organizer in Chicago before earning his law degree. He worked as a civil rights attorney and taught constitutional law at the University of Chicago Law School between 1992 and 2004.”

Now education does not necessarily equal smarts, but Peña Nieto was not exactly very smart in hiding his plagiarism**, so I’d have to give Obama the big advantage between the two.

*To his credit, he has had a lot to deal with lately (click here for the most recent corruption scandal that EPN is facing)

*See this story in the Atlantic for some examples.  Perhaps my favorite part is the fact that EPN plagiarized a former Mexican president, Miguel de la Madrid.  lol you can’t make this stuff up.

First there was the news that Pakistan was sending more officials than athletes to the Olympics: “‘Pakistan contingent will include seven athletes and 17 officials,’ a Pakistan Olympic Association (POA) official told APP.”

and now there is this awesome story about Indian officials behaving badly at the Olympics.   It is aptly titled “India’s Olympians deserve a medal just for putting up with their country’s officials.”  You could probably delete the word Olympians from that title (and replace Indians for India’s) and still have an accurate sentence.

Here are some of the best details:

a. India’s sports minister, Vijay Goel, has been in Rio and has been so rude that he was almost banned from attending events.  Here’s a quote: “‘We have had multiple reports of your Minister for Sports trying to enter accredited areas at venues with unaccredited individuals. When the staff try to explain that this is not allowed, they report that the people with the Minister have become aggressive and rude and sometimes push past our staff.'”  Goel of course was unapologetic and said it was a mere misunderstanding.  Way to represent your country  Mr. Goel.

b. “A nine-member team representing the state of Haryana arrived in Rio ‘to encourage the Haryana players.’ However, the group, led by the state sports minister Anil Vij, has been noticeably absent at key events—even those involving their state’s athletes. Instead they were found sight-seeing and frolicking on Rio’s beaches.”   In addition, many of the Indian delegates flew business class while athletes were relegated to coach.

c. Frugality seemed to be saved only for the athletes, not the officials. Dipa Karmakar, who came in 4th in the vault finals, was not allowed to bring her physiotherapist with her because it was “dubbed wasteful.”  Only when she qualified for the finals did officials react: “the physiotherapist was rushed to Brazil soon after.”

Philippines’ President Rodrigo Duterte apparently isn’t too fond of our diplomatic staff. A recent Guardian article notes that Duterte “first came into conflict with US envoy Goldberg on the campaign trail, after he said he wanted to rape a ‘beautiful’ Australian missionary who was sexually assaulted and murdered in a 1989 prison riot in Davao, the city he ran for two decades.”  Wow! Not surprisingly Goldberg and the Australian ambassador were vocal in their criticism of Duterte’s comment.

And now, Duterte has started a fresh row with the US envoy, stating “As you know, I’m fighting with (US Secretary of State John Kerry’s) ambassador. His gay ambassador, the son of a whore. He pissed me off.”

Holy cow, and this is one of our allies!  Washington is apparently asking for clarification of the comment!  Really?  Do they really want that spelled out?

US:  So President  Duterte, when you said a “gay son of a whore” what did you mean exactly?

PD:  Well, let me go into some detail so you can better understand my intention…

Breitbart reports that the idea of a border wall is catching on in Mexico, but not the one Trump is proposing:

“The editorial board of El Mañana, one of the largest newspapers in the border state of Tamaulipas, penned a piece called ‘Yes to the Border Wall … but in Mexico’s South.'”

According to the editorial board, “Mexico’s southeast has two borders; one with Guatemala and one with Belize, that do not provide any benefit, but on the contrary only problems are brought by these crossing points that are being used for the new invasion.”

I recognize that the illegal immigration on Mexico’s southern border brings with it a number of serious problem, but referring to this as “the new invasion” is (1) scare mongering that won’t lead anywhere good and (2) is sadly reminiscent of what we are hearing up north these days.  I guess s*** does flow downhill (or in this case, down south).

Despite my blog title, I don’t think this motivational trainer in China was actually trying to nudge his clients.  Even so, the idea that this trainer was trying to provide “motivation” is pretty funny.  Here are some of the details:

“A motivational trainer in China beat eight rural bank employees with a stick, shaved the heads of the men and cut the hair of the women after they performed poorly on a training weekend.”

Employees around the world who have bitterly complained about having to go through training weekends are rejoicing that they didn’t get this fool as their “motivator.”

What does Jiang Yang, the fool in question, have to say for himself: “‘Spanking was a training model I have been exploring for many years.’”   Dude, you are really not helping your case!

Of course you know I’m talking about planting banana trees, right?  Kenyan boda boda drivers, tired of empty promises by politicians to repair a road, have come up with an ingenious way of protesting.  They are planting banana plants in the road, arguing that if the government cannot bother to keep it up, they might as well turn it into farmland.

h/t to @kenyapundit, who tweeted the photo with the question: “Why are we struggling with such basics?”

Ken Opalo (@kopalo) wins the internet this morning with a reply that is both correct and poignant:  “Because we are all about shiny things. Leapfrogging our way back to 1600.”