When Robin and I lived in Mexico, Semana Santa (Easter week) was one of our favorite times of the year. So much less traffic! Easy to get into fantastic restaurants! Burning of giant paper mache Judas figures. 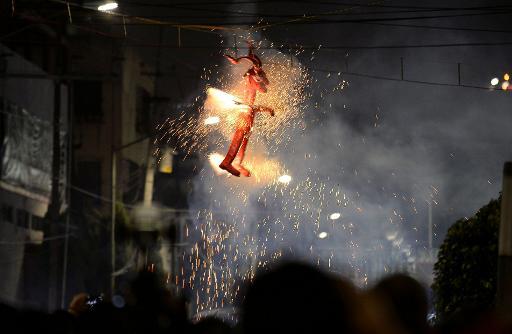 This is a long-time tradition, but Mexico being Mexico, the images can get really creative. For example, when we were there, there were a lot of Carlos Salinas Judases getting incinerated.

Here’s a great and topical pic from this year’s Semana Santa celebrations showing EPN and Mrs. EPN in their multi-million dollar, government contractor provided “Casa Blanca” (photo from @TalamantesCNN) about to get all burnt up.

You can also see a more traditional “devil Judas” in the background waiting his turn.

They have installed 30 squat monitoring machines some of the stations. Did I mention that 4,000,000 people ride the subway in the D.F. every day? And that the stations can tend to get a bit crowded?

People, would 10 squats a day really to anything with weight control? In Russia, the price of a free ticket is 30 squats in under two minutes.

As always, it is so gratifying to me to see a government finding simple, effective solutions to seemingly complex problems.

Mexican President Enrique Peña Nieto has made huge progress in his first two years.  Reforms have been passed opening up the sacred cow that is Pemex, taking on the very strong teachers’ union, and reducing the power of some of the big monopolies in Mexico (owned by some of the richest people in the country, and in the case of Carlos Slim, the world).

All of this activity hasn’t increased his popularity much though.  The public is rightly skeptical of how much enforcement there will be of the reforms, economic growth is much slower than the government predicted, there is still a good swath of the population that doesn’t want Pemex opened up to foreign investment, and there are still huge problems with the narcos and security in general.  EPN’s popularity has fallen from 49% to 43% in recent months.

Yesterday was the Segundo Informe of the EPN Presidency, which is the state of the nation talk the President gives every year.  The government also released a slick new video of the president championing his reforms and Mexico in general, along with hugging old ladies and patting kids on the heads.  Here is a version dubbed in English.  I always find politicians’ campaign videos embarrassingly (and unintentionally) funny, but this one is a doozy in my opinion.

EPN should have paid attention to some other minor matters though, like turning the main public square (the Zócalo) into a parking lot for the 5 hours of his address.  Presidential assistants were allowed to park their cars in the Zócalo, using it as free and convenient parking, thus creating huge headaches for traffic and business downtown.  How many assistants does the President have?  How many are needed for him to give a speech downtown? EPN has been so roundly criticized for this that he has already issued a public apology on his webpage.  Here is a picture of how not to win friends and voters in the capital:

The Atlantic recently had a great photoessay called Inside Mexico City’s Chaotic Underground Rush Hour.  Driving in Mexico City is always treacherous, but things come to an absolute standstill during rush hour, which seemed to expand every year we were there.  Apparently things aren’t much better on the subway, which 4 million people ride every day, making it the second busiest metro in North America behind NYC.

The photos were taken by a Spanish photographer named Héctor Mediavilla. Here are 2 of my favorite:

But this may be changing. Ladies and gentlemen, I give you…..Peatónito (the little pedestrian).

Here’s his homepage. You can follow him on Twitter. Heck, you can read about his exploits here.