Hugo Chavez’s 60th birthday would have taken place on July 29th.  What’s his desperate, flailing, untalented successor to do?  Celebrate the day anyway of course!  Besides the sheer fact of celebrating a birthday for a dead guy with a cake and candles, here are some of the more bizarro parts of the festivities:

1. People actually showed up.  And not just Venezuelans.  Some Latin American leaders (Morales, Ortega, Sanchez Ceren) showed up to join in the fun.  I assume they are either bat-shit crazy or are desperate suck-ups hoping for cheap Venezuelan oil.

2. Maduro led the singing of Happy Birthday to the dead comandante and blew out the candles on the cake. According to a Chinese report, “people marked the day with book readings, concerts and other activities.”  I wonder if the government counted everyone going to a club that night as a celebration of Chavez’s spirit.  I seriously doubt much of the population marked the day with book readings.  I also wonder what the “other activities” are…

3. A group of “anti-imperialists” (you really cannot make this stuff up) came out with a new computer font that mimics Chavez’s handwriting.  It is appropriately titled the “ChavezPro font.”  One article humorously (to me) points out that “Chavez’s bold scrawl became famous to Venezuelans as he used to spend hours on national TV writing and drawing on boards and papers to explain policies, develop ideas and sign deals.”

4. And, lastly, saving the best for last, the little bird is back.  Last year Maduro claimed the Chavez came to him in the form of a little bird. So what does the bird have to say for himself now?  Maduro says it best: “A little bird approached me again,” he told relatives of Chavez and officials at the event, imitating a bird whistle. “The little bird said ‘El Comandante’ was happy, full of the love and loyalty of his people. He must be proud, happy.” LOL indeed.
I figured the little bird must be red since it is Chavez’s spirit. Here is my guess as to what it looked like: 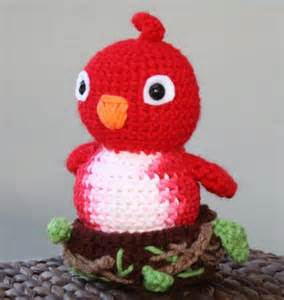 Here is someone else’s idea of what the bird looks like: 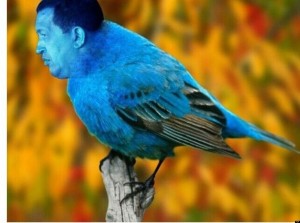 But Maduro beat us to the punch by commemorating the little bird on his own headgear (which I guess represents a nest?).  It would be even funnier if this goofball wasn’t the head of state.