We recently blogged about the terrible violence afflicting Guerrero, Mexico and particularly Acapulco.

Instead of pleading for more security (which I’m sure they have done numerous times), the Association of Coastal Merchants (Asociación de Comerciantes Establecidos de la Costera) in Acapulco has formally requested that they be excused from paying government taxes because they already pay so much to organized crime in extortion.

They note that there have been a lot of murders because of their inability to pay double (both taxes and extortion fees).  Almost 200 businesses in the area have already closed their doors because of a deadly combination of extortion, violence, and drop in tourism.  The group predicts many more will follow suit.

That’s a sad recognition of how little the state actually governs in Guerrero.

A recent report notes that 39% of the world’s smokers hail from India, a number the Indian government is anxious to reduce.  To do so, it has increased taxes on cigarettes precipitously, a move that has worked to disincentive smokers in other countries.

For instance, the article notes that the US increased cigarette taxes by 320% from 1996 to 2013, a period in which the number of adult smokers fell by almost one third.  Nothing is uncomplicated in India though, where the government has increased taxes by “1606% on the shortest non-filter cigarettes available and 198% on the shortest filter cigarettes since 1996.”  Nowadays, the tobacco tax makes up “about 60% of the price of a best-selling pack of 20 cigarettes, against about 43% in the US.”

and, the grand result was that “cigarette smokers in India increased from 25 million to 46.4 million over 14 years.”  So what went wrong?

One of the answers is that India is getting richer.  The article notes that “cigarettes were 175% more affordable in 2011 than in 1990, and tobacco has become 5% more affordable in India since 2008.”  That’s a good problem to have–in essence the government can’t raise taxes fast enough to overcome the income effects.

The second answer can probably be gleaned in the quote above about the tax increases.  Until 2014, India had 7 different taxes on tobacco, depending on how long the cigarette is and whether it had a filter.  Now they have only 6!  The WHO rightly argues that the tax structure is “complicated and, therefore, difficult to administer.”  I would add that it is ripe for corruption too.  It reminds me of when Argentina had 8 different external tariffs, a situation that not surprisingly led to massive problems with corruption.

Indian cigarette manufacturers are more than able to play the tax game.  When taxes increased across the board to 72% in 2014, “consumer giant and cigarette market leader ITC to shorten the length of its cheapest brand, Bristol, to keep prices and sales intact.”  A reduction of cigarette length by 5 mm allowed them to keep prices the same.  Well played ITC!

Via Chris Blattman, I found the chapter “Taxation & Development” by Besley & Persson. It is self recommending, but I wanted to talk about an amazing graph it presents: 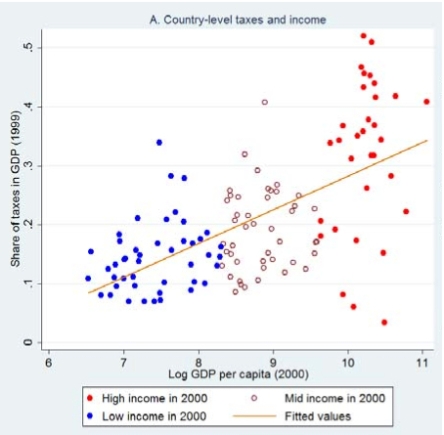 10 rich countries have a tax share of above 40%, while 8 are at or below 20%. The range for the rich countries appears to be from 4% to 52%, so I guess there is more than one tax path to prosperity (the tax data used come from here).