I’ve often lamented the lack of PR expertise that EPN has in Mexico (either that or he just pays them no mind).  Here are some new campaign tactics that I hadn’t thought of before, courtesy of Belarus’ President-for-life Alexander Lukashenko.  He released photos of him harvesting potatoes and melons at his official residence, apparently to show that he is a hard-working man of the people.  The produce yielded was then given to orphanages.  Here are some great pics from the show:

Note that it’s important to dress up for the photo op.  An old undershirt and boxer shorts will do just perfectly. (Note that he looks just like Stan Wawrinka winging this year’s French Open)

The article notes that this isn’t the first time Lukashenko has resorted to some odd photo ops.  Here he is with Gerard Depardieu “scything grass at the leader’s farm north of Minsk.”  Remind me not to visit him—sounds like he puts his guests to work (although it doesn’t look like Depardieu missed his calling as a farmer). 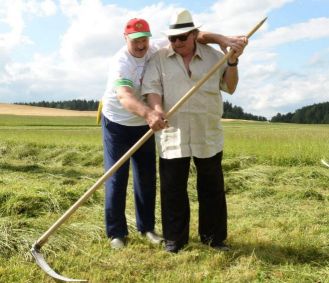 Pooty-poot is the gift that just keeps on giving.

In the “truth is stranger than fiction” category, it turns out that the US is also shipping burros to Guatemala.  The Bureau of Land Management is in charge of dealing with wild horses and burros in the US.  Wayne Pacelle, president of the Humane Society, argues that instead of putting into place a feasible plan of dealing with fertility issues in these wild populations, the government has decided it’s easier to just ship them to Central America.

Pacelle, for one, is not amused.  He notes that the program is “at odds with the provisions of the Wild Free-Roaming Horse and Burro Act, which requires that the BLM’s first priority has to be the humane treatment of wild burros in their care.”

He also sensibly adds that “Guatemala has burros of its own, and does not need shipments of burros compliments of the BLM.”  I’ve read many cases of odd foreign aid practices over the years, but this is one of the strangest.  Or maybe it’s not foreign aid.  Perhaps we are selling the burros to cover the cost of their airfare!

Two stories about Zimbabwe recently caught my attention.  The first is the news that Robert Mugabe and his family starred in a 2 1/2 hour reality television program. I’ll discuss it this morning and the second awesome piece of Zimbabwe news later this afternoon.

Here are some nuggets from the reality show:

1. Apparently, the Mugabe family all love each other very much (good to know, they could be the only ones).  They also hold Margaret Thatcher in great esteem (somehow I doubt it was mutual), but regards Tony Blair as fundamnetally dishonest.  They apparently call him Tony Bliar around the house (I’m sure Blair is very broken up about this. Mugabe, a well-known homophobe, once referred to Blair’s government as “the gay government of the gay United Kingdom“).

2. The sycophantic director asked Mugabe about his current wife Grace, who he started seeing while his first wife Sally was terminally ill.  The answer is truly unbelievable, even for Bobby:

“Mugabe blinks, as if holding back tears, and says: ‘Although it might have appeared cruel, I said to myself well, it’s not just myself needing children . . . my mother has all the time said “Am I going to die without seeing grandchildren?”

‘So I decided to make love to her. She happened to be one of the nearest and she was a divorcee herself. And so it was.’
Asked what Sally thought of his infidelity, Mugabe replies: ‘I did tell her and she just kept quiet and said “fine”.’

I’m sure the Zimbabwean public love him even more after hearing that touching story.

In the “truth is stranger than fiction” department, Venezuela (a perennial contender) wins hands down:  “Venezuela’s National Assembly has backed plans to import 39 million rolls of toilet paper, in an effort to relieve a chronic shortage.”  I’m not sure if this qualifies as good news or bad news. I guess good news that the shortage is over, bad news that the government has so screwed up macro and exchange rate policies that such a phenomena could even happen in the first place.  It’s never a good thing when your economic problems sound similar to the ones created by Mugabe in Zimbabwe.

In the “mean reversion” department, there are two contenders.  First, in Guatemala, the country’s top court overturned the previous week’s conviction of former President Rios Montt on charges of genocide and crimes against humanity. Second, in Mexico, it looks like much needed energy reform has stalled.

And finally, in the “questionable causality but hopefully still true” department, there seems to be evidence that economic stability in the region has reduced inequality.